The McKinnis Family Enjoys the Birds and Butterflies

FAIRFIELD – David McKinnis is totally ok with birds getting the blueberries before he does.
He looks forward to harvesting onions from the family’s raised beds; and he loves driving his kids to school past the flowering perennial gardens – yellows, reds, purples -- bordering his driveway.
When he and his wife Elizabeth McKinnis first moved to Fairfield, Conn., he said they knew they wanted a landscaper who was knowledgeable about organic methods and who wouldn’t pollute their property with synthetic chemicals that could be harmful to their children and to their enjoyment of the two-acre yard.
“I’ve never been one to put a lot of stuff on my yard. We lived in Seattle before, on a lake, and knew we wanted to avoid chemicals. We were very much aware that what we put on our lawn would end up in the lake. We wanted to be good stewards of the land,” said David, a software engineer who grew up in North Carolina. 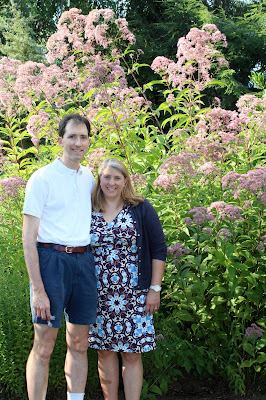 “Even when I was growing up, having a perfectly lush and groomed lawn wasn’t something you needed to do. I knew when we moved here, that I wanted someone whose ideas and practices would mesh with my own,” said the father of four children, aged 15, 11, 11 and 9.
David found Michael Nadeau through his website, while searching for an organic landscaper, 12 years ago. He said he was delighted to discover someone he could completely trust with his property.
“Generally, I can turn the yard over to him and good things happen,” said David. “They provide excellent service for landscaping, and also they snowplow us out in the winter and do fall clean ups for my in-laws in Norwalk.”
At the McKinnis’ Fairfield home, Nadeau and crew have installed almost constantly blooming perennial and native meadows along both sides of their long driveway, planted trees to provide shade in the backyard and installed a beautiful 20-foot by 20-foot rain garden that attracts butterflies and birds as well as collects and helps to divert rainwater from streaming down the hill onto neighbors’ properties.
Now in its eighth year, the rain garden is well established and provides a wonderful habitat for birds and insects, David said.
Nadeau said the major issues with the lawn were soil compaction (following new construction) and problematic grading, with low spots that held water and weakened the grass.
“We did standard and bioassay soil testing, core-aerated and sliced the soil, applied one-half inch of good compost, overseeded with a low-maintenance fescue seed mix with five percent Dutch white clover, and began applying compost tea (eight applications the first year; four every year after up to now).  We overseed the lawn each fall with a fescue mix to continue to fill in any thin areas.  Because of the clover and compost tea, the lawn receives only two half-rate fertilizer applications – one in late spring and one in early September, and no fungus or insect controls.  The growing family of four plays hard on the lawn and it holds up nicely.”
Choosing deer resistant native plantings was also important, he said.
“The landscape planting was the typical ‘necklace’ of ‘landscape linoleum’ type of plants around the foundation, with very little else. The deer were decimating even those plants so we enclosed the rear yard with deer fencing and re-landscaped the front of the house with deer resistant native plantings and perennial gardens using native meadow grasses and wildflowers. All the plants are regionally native to Connecticut. Up close to the front of the house is a wet spot where we grew the native Hibiscus moscheutos with its huge flowers in mixed colors that sprawls over a low serpentine stone wall, complemented with more ‘wet feet’ plantings, which the kids loved. Another wet spot received a muck soil and bog plants, such as pitcher plants, again for the kids’ enjoyment. On the far side of the driveway there is a mixed blueberry patch and meadow that jumps the driveway in one spot to add a look of authenticity – that the meadow on either side of the driveway allowed the meadow to blend in with the managed landscape instead of being starkly separated by the driveway. The crowning glory was a 35-foot tall, 10-inch caliper, sugar maple planted in front of the breezeway that connects the garage with the colonial house. It is growing strongly after nine years and provides a needed softening of the 2 ½ story house and the quintessential New England fall look that only a sugar maple and a colonial house can,” he said. “The back yard sports a mini-orchard with pears, apples and cherries. Truth be told, the critters get most of the fruit. The trees are managed organically, of course, with compost tea with Neem Oil, kaolin clay, and selected NOFA-approved insecticides and fungicides, but only when and if needed. Besides the vast and very important rain garden and raised bed vegetable garden, the rear yard has three more elements yet to be completed: a stone patio, a grove of gray birch/quaking aspen trees with a living mulch of shade tolerant flowering groundcovers, and rear foundation planting. Also, possibly when the kids move on, some of the large rear lawn can be converted to more meadow or some other ecologically appropriate planting.” 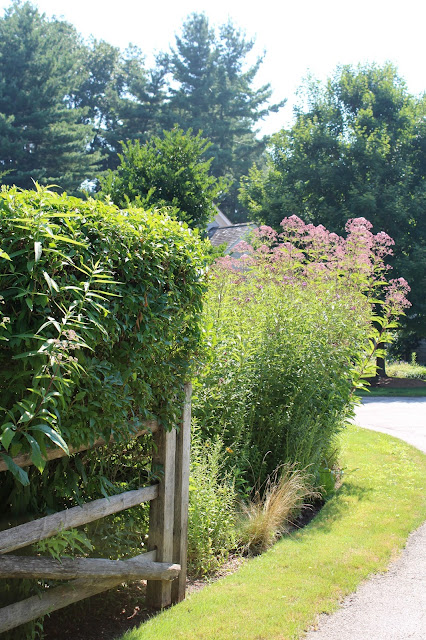 Thoughtful planning and careful consideration have paid off, said David, who appreciated the comprehensive landscape plan Nadeau provided after their first meeting. He suggested waiting on planting additional trees until home construction on the screened porch was completed, so that heavy machinery wouldn’t compact the soil or damage new tree roots by running over or dislodging them.

“I’ve learned a lot in the last 10 years by working with Mike,” he said.
Nadeau also installed four raised beds where David and his family grow tomatoes, zucchini, basil, strawberries and this year, onions. They compost all of their vegetable scraps from the kitchen as well as weeds from the garden beds, in customized bins along their back fence.
Nadeau greatly enjoys working with the McKinnis’.
“David is a computer genius and Beth, his wife, is a medical doctor – obviously both highly educated and totally devoted to caring for the Creation while providing a safe, functional and educational place for their kids to grow up.  They enjoy participating in creating compost from on-site materials and kitchen scraps, growing some of their own food (and passing this on to their kids), and using their own compost to grow them.  … They were clear that pesticides, invasive plants, and any harmful practices were out.  Together, we dreamed up the landscape and a talented landscape designer, Lois Beardsley and I, put it on paper,” he said.
“David and Beth are in the top handful of clients that I wouldn’t do without.  I have learned so much from them as good people and parents, they allowed me to experiment and make mistakes – with the opportunity to correct them – and sharpen our organic land care skills.  They really care about the well-being of the earth and all its inhabitants – human and non-human alike,” he said. “They entrusted me with their piece of the earth and I hope I have not disappointed them.”
David and Elizabeth, a physician who also volunteers on the board of the Westport Weston Family YMCA, enjoy teaching their children about slowing down to appreciate the natural world and learn about their environment. They often stop the car while driving to school to admire flowering plants or birds.
David is also involved with the Mill River Wetlands Committee, a non-profit organization that works with Fairfield public schools through their science curriculum to teach kids about the river, water cycles and the river’s productivity. Students in grades three through six study the river through exercises including water sampling and analysis under microscopes, experiments testing the acidity and cloudiness of the river, and erosion, he said.
“The yard provides a good opportunity for us to appreciate the natural beauty of the world. For a yard our size, and for what’s important to me, it’s nice to be able to have someone who we can trust and who makes it look good. And without using things that scare me,” he said. “Mike is also on top of recent trends and is a good resource as well.”
Nadeau put David in touch with a local custom wood worker who not only installed a fence but built shelving and will now work on the laundry room.
“We certainly recommend Mike to friends who have hired him as well and we’re so glad we were able to find someone who takes the right approach,” said David.
Posted by CT NOFA at 1:04 PM

The Organic Land Care Program is managed by the Northeast Organic Farming Association. The OLC has an Accreditation program for organic land care professionals based on the NOFA Standards in Organic Land Care. We also have a number of publications and programs to support homeowners and gardeners working to maintain their yard, garden and lawn without harmful chemicals.